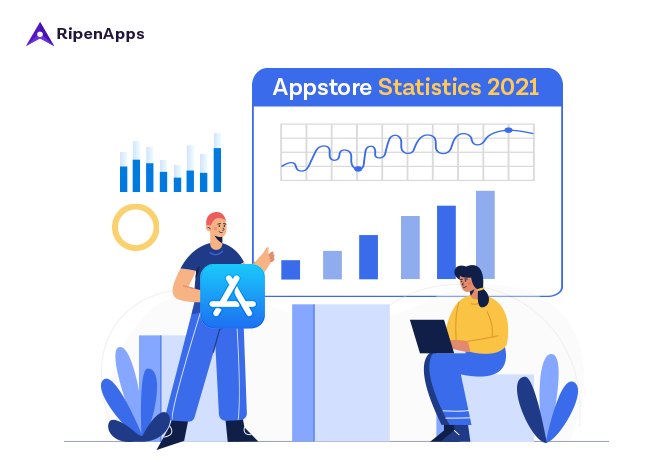 Latest App Store Statistics for 2021 & Predictions for Beyond

Apple App Store Statistics is quite an impressive segment to watch out for before developing your iOS app for your business in 2021 & 2022. If we look at the stats and figures of the App Store- there is no decrement at any point in the graph. Since its launch back in 2008, the Apple App Store has seen a huge increment in several apps submissions, app downloads, app ratings & current app availability.

App Store is creating a buzz on charts for many years for many reasons. Although in comparison to Google-backed Android, Apple’s iOS is slightly lower in market coverage, in certain areas of concern, Apple is coming out as a favourable choice for users, app developers or app owners.

When it is about mobile app development, developers consider two huge platforms, i.e. Android or iOS. And if we talk about getting the latest and cutting-edge technology, the first pick is iOS app development.

Being known for its focus on security and intuitive UX, long-term growth & benefits, revenue-generating and successful positioning on the stores, Apple devices and iOS app development are widely used in business and enterprise.

For this article, we’ve dug out for rich database of app data and statistics to analyze the Apple App Store. In so doing, we have captured not only the current state of the store but also the emerging trends that will define its future.

Hence, To reap all the benefits of your next project, consider the mentioned App Store Statistics for 2021 & 2022:

Demonstrating the history of the Apple App Store:

Apple is a brand that needs no introduction. The huge inclination towards Apple devices is making this brand a “market sensation for all time”. They are one of the most impressive & chosen product catalogues globally, provide a variety of popular devices- iPhones, iWatches, AppleTV, MacOS, iPads, and much more, software applications, and online services. Among all the innovations, Apple App Store is one of the best.

“In 1983, International Design Conference in Aspen, Colorado, a man has described a future in which consumers could buy & download softwares directly from their computers, the man was no other than- Steve Jobs.

After 25 years, in 2008, Apple launched the App Store, and the vision in Job’s eyes became a reality. Following the success road, Apple App Store became one of the world’s first commercially successful mobile app marketplaces.

Today it connects millions of iOS device users to millions of mobile apps and games from developers and publishers worldwide.

We have curated answers for several questions that you might consider before developing your app leveraging the benefits & popularity of iOS & App Store:

1. How many apps have been published on App Store?

As the numbers always fluctuate, the figures are usually anticipated to grow in the coming years. So if you consider developing your next app in iOS, Google Play Store vs App Store statistics plays a vital role in clear out things.

2. What is the distribution of apps VS games of the Apple App Store?

Considering the popularity of the Apple App Store, here we are differentiating the numbers of apps vs games of the App App Store. As iOS is the most-approached platform nowadays, their apps and games are also in huge demand. 17.1% of games are on the App store, while 82.8% of apps are on App Store

3. What is the distribution of free apps VS paid apps of the Apple App Store?

88.7% of apps available on the iOS Apple App Store are free to download. Conversely, 21.3% must be purchased. Of course, it should be noted that many free apps may either offer or require in-app purchases.

Read Also: Google Play Store Statistics you must consider before building your app

4. How many are App publishers on the Apple App Store?

If we talk about publishers of the App Store, 731,301 app publishers have published apps on the iOS Apple App Store.

5. How many Apps are released on the Apple App Store per month/week?

Considering the plethora of benefits that the App Store offers to increase the revenue and mobile app sale, various brands are expanding their businesses to the stores that carry millions of Apple users.

According to mobile app developers and publishers, the majority of apps are free to download. 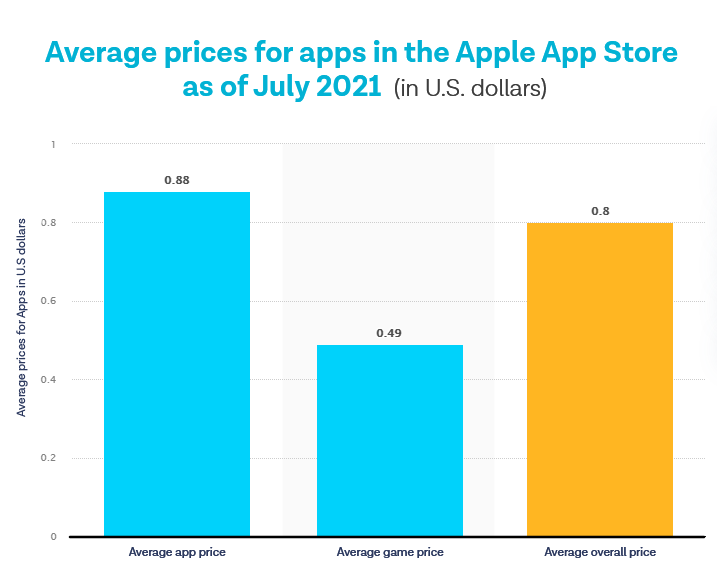 7. What is the rating distribution of iOS apps?

Ratings play a pivotal role in grabbings the eyes of consumers. By enabling the option of rating the app to the users, app developers can make their apps popular and show their quality and popularity. Currently, 316,424 apps have been rated by users, while majors have not yet been rated.

There are various ways to increase the app ratings and how app ratings play a crucial role in the app’s success.

We’ve determined how these ratings are distributed: 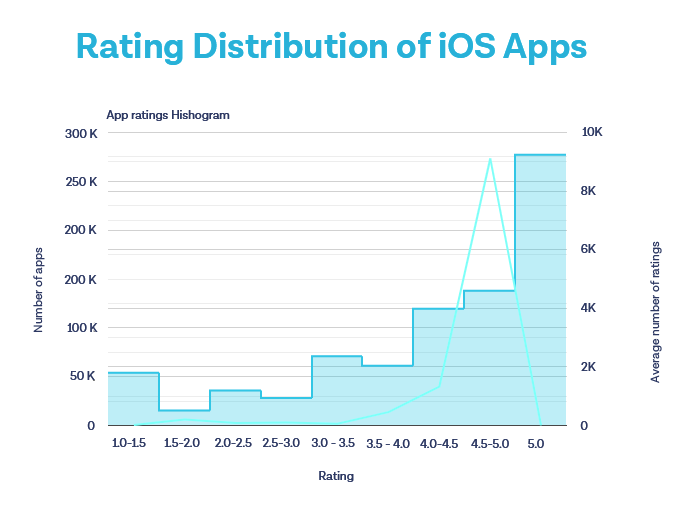 A new report from Sensor Tower says that Apple’s App Store has generated an estimated $41.5 billion in revenue in the first half of this year.

That would represent 22% growth in the same period last year. 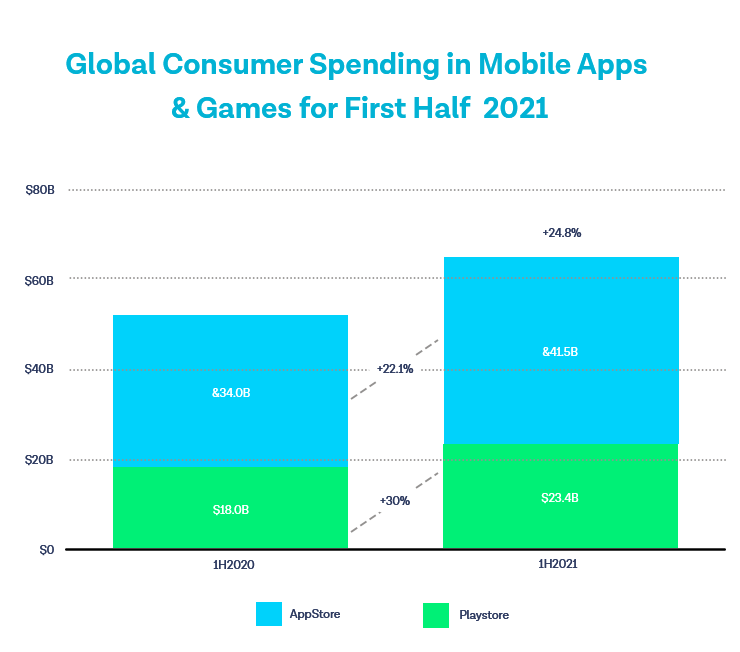 9. How much has iOS app developers earned from App Store till now?

Since inception in 2008, Apple is giving much to their mobile app developers.

The experienced iOS mobile app developers were paid over $26.5 billion in 2017.

While the count has increased, and the iOS mobile app developers have earned over $100 billion in 2018.

The cumulative payout to developers had amounted to 155 billion U.S. dollars in 2020.

And, as of January 2021, Apple had paid a total of over 200 billion U.S. dollars to iOS app developers selling goods and services through the App Store.

10. What are the lasted download counts on Apps on App Store?

In the second quarter of 2021, the total number of apps downloaded by iOS users is 7.9 million that is slightly lower than the Google play store. Still, the Apple App Store is stronger in terms of revenue generation.

Mobile games are much popular and give much business. The gaming industry is also on the rise because of its higher user-engagement factor. And it has been reflecting in the 2021 stats also. As of June 2021, business apps were the second-highest most popular category in the Apple App store with a share of 10.10 percent & Games are on the top most popular iOS app category, accounting for 21.49% of active apps.

Taking about the most popular game of the App Store, as of March 2021, Roblox was the top-grossing gaming app generating $3M revenue per year. 12. What are the top 10 most downloaded free Apps in the App store?

Considering the past two years of pandemics, apps have been experienced a massive shift. People were restricted to follow social distancing, and apps have arrived as the saviour.

Various apps have been considered as life saviours. Hence, based on the past few years, here we have curated the top 10 most downloaded free apps in the app store as of now: 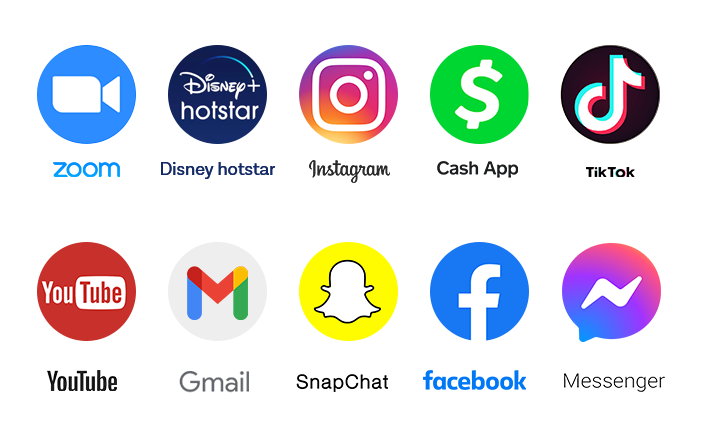 Mobile apps have become the major useful thing in our life, and today’s world is completely dependent on mobile apps.

App Store is flooding with countless apps. Hence, investment in developing an iOS app for your business could pluck huge revenue and popularity if it is built perfectly.

RipenApps, a leading iOS app development company, conveys excellent iOS applications for all iOS devices. Contact our specialists at [email protected] to take your business to a higher level.

1. What amount does it cost to put an app on the App Store?

To submit the app on the App Store, enrolment in the Apple Developer Program is a must.

It costs $99/year, but it will give you access to many different benefits, including Submitting apps to the App Stores on all Apple platforms.

2. How to feature my app on App Store?

3. What age groups use apps the most?

4. How much time & cost does it take to develop an iOS app?

Different Apple App Store statistics, data, and figures reveal that iOS apps are high in demand, and therefore the companies aspire to hire iOS developers. The development time and cost of an app depend on the complexity, features, and nature. However, by connecting with the best app consultants, you’ll get to know the entire thing.

5. What is the role of App Store Statistics?

Whether it is about Apple app store download statistics or Google Play Store revenue data, the tables, charts help people know about the current trends and help them draw an accurate conclusion based on the same.