All sweetness has arrived to an end on a tweet of Sundar Pichai, “Quite the Quote.” Google has announced its dietary plan as Google is saying Good Bye to all sweetness now. Google is breaking the 10-year history of naming Android after desserts like Android Cupcake which is followed by Donut, Éclairs, Froyo……. till Pie, now company is bailing on providing a codename beginning with a subsequent letter of the alphabet (in this case, Q), which is the way we’ve been referring to Android up to now. This year is Android 10; next year will be Android 11, and so on. 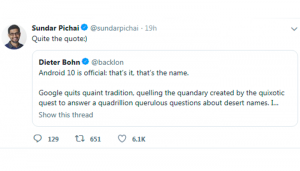 The operating system at present known as Android Q has been in open beta since March. There has been much online hypothesis about what Q-themed treat Google may use as the official name-Quindim! Queen’s cake! Quiche! Quesito-yet a Google declaration today clarified that it wouldn’t be any of those. There won’t be a name by any stretch of the imagination. The new name of Android’s OS will be Android 10.

Why Google Gave up its Dessert Naming Convention:

This naming custom was a fun piece of the Android update each year. Be that as it may, the individuals were misconception Android’s dessert names, for example, Android Lollipop or Android Oreo internationally. Google clarified this by giving the model that letters ‘L’ and ‘R’ are same when communicated in a couple of languages; Marshmallows are as yet disagreeable in numerous nations and Pie isn’t a dessert in certain spots. Every one of these variables pushed Google to choose that the Android names be clear and reasonable by each community globally.

In case you’re thinking they just avoided the letter Q since it’s an extreme one to coordinate with a sweet, you should know that Google has discarded Android’s fun desserts names for good. From Android 10 into the not so distant, the organization says it intends to stay with a numbers-just naming show.

Android 10 is scheduled for overall public releases “in the coming weeks.” A more specific time frame has yet to be announced.