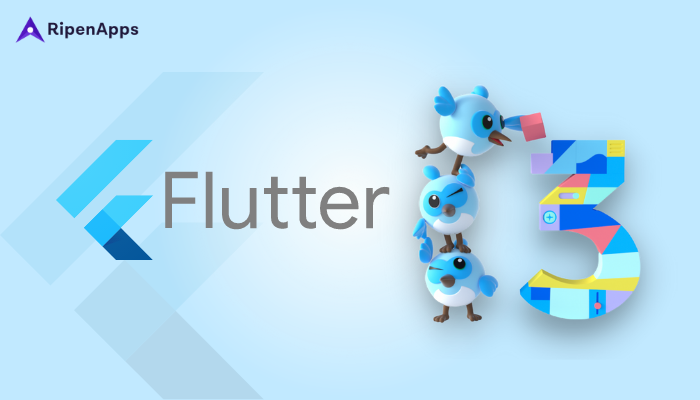 Google’s annual developer conference, “Google I/O 2022”, recently kicked off and concluded a plethora of perks for app developers. The conference concluded with many announcements for mobile app developers, and Flutter 3.0 was the major one.

The latest Flutter 3.0 has become the limelight for the app developers community, and the major point of attraction is its latest and exciting features. Flutter added various features and updates in its latest version, 3.0.

This blog concludes with the top features and announcements about Flutter 3.0, released in Google I/O 2022 conference that every mobile app developer should uncover.

About Flutter & its Versions

Flutter is Google’s mobile app SDK for crafting high-quality native experiences on iOS and Android in record time. It offers a great lineup of features, such as the material design language and dynamic gestures. This help developers deliver beautiful UIs for your users.

Since Flutter was launched, the team of Google has been continually updating the enhancements and features to provide vast opportunities to the Flutter app developers in building user-experience rich mobile apps.

“Now the fact arouses that: 91% of developers voted Flutter on being the smooth platform which takes less time to develop an app.”

Sneak Peek at the Flutter’s Journey

Flutter 1.0: The version came up with the new development tools and support for Metal.

Flutter 2.0 & 2.5: Flutter arrived with features like Material You, the next-gen material design.

Since its release, an open-source programming SDK has become one of the top developer-friendly toolkits for building iOS and Android apps.

Leveraging the power of Flutter and its development expertise, we are proud to be a top Flutter app development company.

The latest version of the SDK contains major keynotes in the following areas:

“Flutter is faster than ever before”. Within just three months of Windows stable support for Flutter, it has concluded the opportunity for mobile app developers with another ability to build production-ready desktop apps.

The team has also invested in aiding Intel & Apple Silicon with universal binary to ensure that Flutter gives a native-like experience on macOS.

There is a Platform menu bar widget to create platform-rendered menu bars on macOS, support for accessibility services on macOS, Linux, and Windows and supported international text input across all desktop platforms.

Flutter 3.0 Carries a lot for Mobile in its Store

The latest version has arrived with exciting and engaging announcements for mobile app developers. Now,

Developers can use MediaQuery class and assign rules for DisplayFeatures, detailing the information about device elements such as hinges, folds, cutouts, and more.

To provide a smoother experience during fast animations, Flutter 3.0 brings new support for a variable refresh on iOS, reaching 120 Hz from 60 Hz.

For those having a ProMotion display and iPhone 13 Pro & iPad Pro devices, Flutter provides support of variable refresh rates to mobile app developers.

Flutter 3.0 comes up with a couple of web updates that conclude with a new API to automatically detect images.

The API uses the browser’s built-in image codecs, speeding up image decoding 2X and off the main thread asynchronously.

This new update of Flutter also presents a new web app lifecycle API. The API provides the flexibility to take the command of controlling the app’s bootstrapping process from the hosting HTML page.

App publishers require an extensive set of tools to render them access to building, releasing, and operating their applications and services like data authentication, cloud functionality, device testing, and data storage.

In Flutter 3.0, Flutter supports app publishers to build, release, operate and maintain apps with various functionalities with a range of services such as Sentry, AppWrite, and AWS Amplify.

However, Slashdata’s developer benchmarking studies state that 62% of Flutter app developers use Google’s product Firebase. Hence, to make it a superior integration, Google has announced full support for Firebase plugins for Flutter.

From now onwards, developers can find the source code from the main Firebase repo & site.

In addition, Flutter 3.0 has also concluded a Flutter Crashlytics plugin as an improvement update. This will allow developers to track, prioritize, and fix stability issues that erode app quality, saving time from troubleshooting.

Along with adding exciting announcements to mobile, web, and desktop stores, Flutter is now touching new heights in game development.

Google has launched a Casual Games Toolkit in its new Flutter 3.0 release, which will help app developers to create & launch casual games.

Other Enchanting Updates that are Worth Reading

With ThemeData. Extensions, Flutter now allows developers to add their desires to the material library’s theme.

Google has again marked its success with the new release of Flutter 3.0. Now Google is ready to assist more businesses in joining its club. With the exciting perks in Flutter’s new launch, it’s become a number one choice for app developers and businesses.

To leverage the power of the latest features & updates from Flutter, businesses are required to approach the top Flutter app development company to kickstart their new project in Flutter.