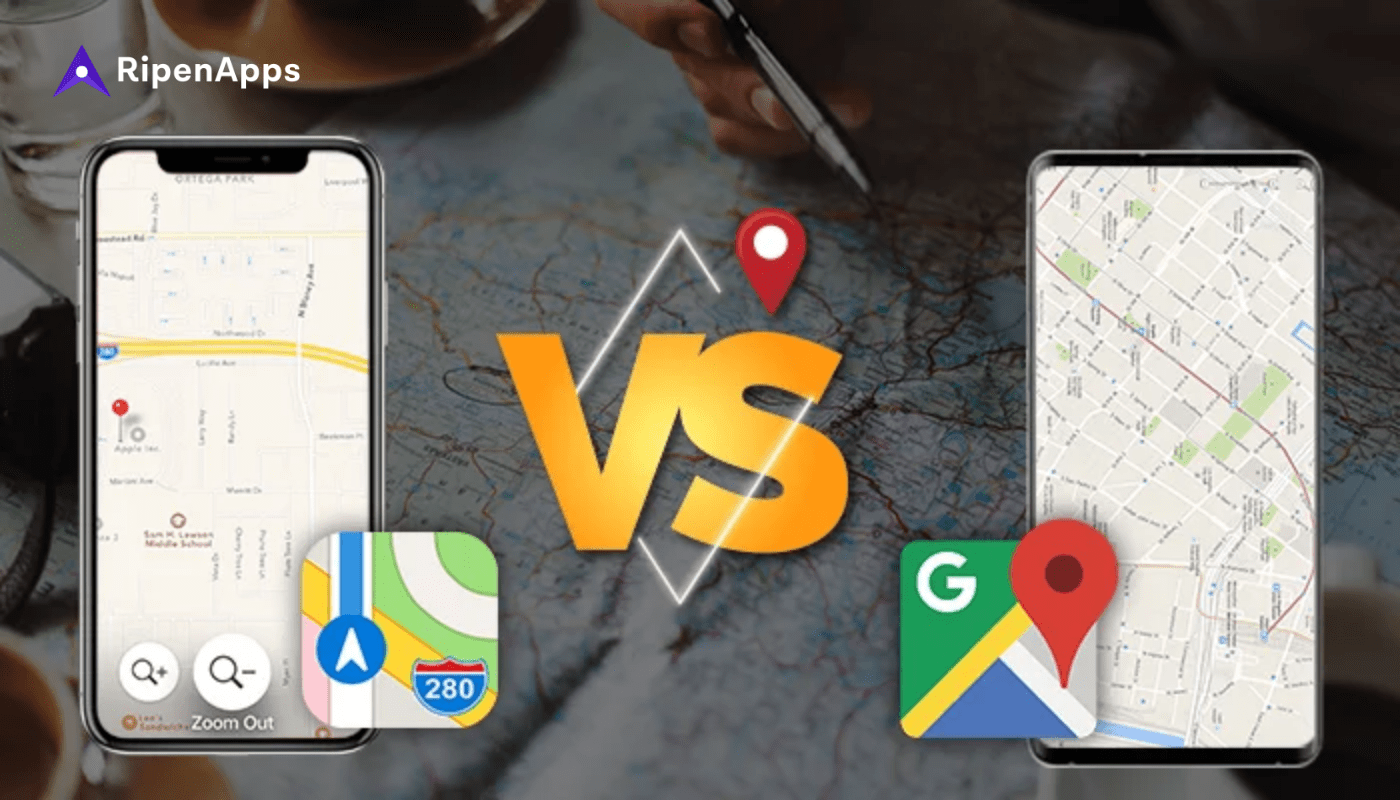 Apple Maps Vs Google Maps: Which one navigates precisely?

Say you need to find a route to your hotel in another city, or locate the nearest restaurants — maps are there for you. Having trouble identifying where you are, exactly? Maps can help with that, too. Late for a meeting? Maps can show you the way wherever you are. That is how Maps helps everyone to find their places and navigate everyone’s route.  Now, no one needs to learn the techniques, and there is also no need to ask an outsider about the places as only a simple tap on online maps navigates you on your way. Well, this was the significance of Maps, whereas, in the navigation app war, the relationship between Apple Maps Vs Google Maps has been twisted as a battle now.

In 2012, Apple—which had used Google Maps as the default mapping service for all iOS devices—split from Google and released its own Apple Maps platform. While Google Maps launched back in 2005 and the American tech giant has continued to improve the service by introducing Smartphone apps for both iOS and Android to make it more accessible.

Right now, Apple Maps & Google Maps both are working precisely in their zone, but still, some hiccups need an accurate result to find for “which is best in- Apple Maps Vs Google Maps war”.

Let’s Take a Look over Popularity of Both

To find out Which Navigation App among Apple Maps or Google Maps works precisely, Let Us Have a Battle Begin…

Apple Maps is available on iOS, watchOS, and macOS devices. That incorporates the iPhone and iPad, Mac Watch, and Mac (running 10.11 El Capitan or later). There is no browser adaptation available.

Google Maps is available on every modern device, with devoted apps for iOS and Android, wearables like the Apple Watch, and the first program put together to form concerning the web. Google likewise has a fully-fledged atlas companion called Google Earth, which uses a great part of similar data.

Apple Maps has radically improved since the humiliating begin it had in 2012. In light of my use, I’d state that Apple Maps is “adequate” for regular use, specially developed areas. Rural users might need to reconsider since this is the place the main part of the issues appears to emerge.

Google integrates numerous focal points with its search listings. Apple Maps pulls from Yelp, The weather Channel, Foursquare, and TomTom. Discovery of suggestions has improved essentially since Siri would now be able to give setting mindful recommendations dependent on set criteria. Google does this also obviously, with more data and continuous updates.

Google Maps is utilized on a billion devices consistently. It is highly unlikely Apple can contend with the sheer volume of data that Google Maps has available to its. Since Apple Maps is restricted carefully to Apple devices, the pool of data is normally smaller.

Google bought satellite imaging company Skybox for $500 million to improve the accuracy of its mapping service. It also employs a huge number of staff to check and correct problems with the service. As a result, Google Maps is unsurprisingly the more accurate mapping solution.

Apple Maps has been supplied with unbelievable new features. Thus, with no further ado, we should examine what you will get with the iOS 13 update.

iOS 12’s update has been more updated at this time. The Maps app utilizes the Maps engine created by Apple. It encourages a point by point and clear perspective of building, pools, footpaths, and so forth.

Beforehand, you could review the street traffic conditions and risks just by empowering turn-by-turn directions. But, with the iOS 13 update, you would now be able to see the route ahead initially previously in the Maps interface. This empowers you to choose which route is the most appropriate for the travel and whether you should search for an elective path when there is traffic ahead.

There is additionally another junction View in this feature that enables the driver to arrange the turns out before they show up, to maintain a strategic distance from wrong turns and directional misses.

Additionally, Siri route has been improved – it currently gives increasingly characteristic and genuine headings dissimilar to previously. For instance, before it would have stated, ” Turn right in 500 feet” however now, you may hear it state “turn right at the following traffic light” which is more life-like and functional for the drivers.

Achieving your end-point goal has turned out to be simpler with the improved Maps app. Regardless of whether you are exploring a vast setting or a specific building, you will get the most exact and exact routes, not at all like previously.

ETA Sharing is progressively precise with the new refreshed updates. You would now be able to share your arrival time with others. Additionally, the time will automatically change with the changed conditions like expanded Traffic, and so on.

You can get your hands on the most recent data about Flight Landings, terminals, door areas, takeoff timings, etc., from inside the application.

It is, in short, a proportionate to the Google Street View. It offers a superior glance around in the Street view level. You can see increasingly exact and precise pictures.

Alongside the development and addition of different Maps features, Maps feedbacks form has likewise experienced better. Presently, you can make revisions like locations, business areas, and others effectively.

Other than the above-mentioned, features like Favourites, Collections, and Junction View have been added to CarPlay. It also provides updated route planning, direction navigation, and search.

Being the most favourable & approachable navigation app, Google Maps have continually maintained its prestige by launching new advance and amazing features.

Google Maps now enables the integration of Spotify, which allows users to be able to access Spotify while using Google Maps for those who demand music on their way to the destination.

User can likewise connection to Apple Music or Google Play Music too, enabling you to have the option to tune in to your playlists in a split second.

Google assistant intends to be the sharpest AI assistant around and being incorporated into one of Google’s most popular apps helps in upgrading its usefulness considerably more.

Informing your companions, partners, or family on where you are during your outing is significant, particularly if you are running late, or have a crisis en route. Google Maps permits this capacity by including the Sharing trip progression button. Utilizing this, clients would almost certainly send in instant messages to their contacts about the fact that they are so close to their goal.

At first, declared as one of the up and coming updates, the Explore tab would now be able to be seen on Google Maps. This enables users to see the nearby areas that merit a look, similar to restaurants, gyms, and even milestones and attractions.

Google Maps is still the superior mapping solution, and it likely always will be.

But iOS 13 represents a critical turning point for Apple’s n navigation app that could redefine its reputation. Even with the new update iOS 13, Apple Maps may not have as much to offer as Google Maps. But the company’s presentation at its Worldwide Developers Conference gives iPhone owners confidence  that it may be able to execute certain features better than Google Maps, which could prove to be more important in

Remember that much of this is subjective and will depend on where you live. If you travel a lot, it makes sense to keep both around just in case!
Get your all queries cleared at [email protected]