Cricket is a religion and a World Cup is a month-long festivity for the cricket crazy fans in the country. As you all people know, the fever of the ICC Cricket 2019 World Cup Match has started from 30 May 2019 and will continue until 14 July. These Matches will be plated within 48 days in England’s 11 Spots. We all can clearly see the excitement and curiosity for the ICC World Cup in the fans.

Talking about the craze, you will see the craze of the World Cup Match in every street in a different country, in many cases, the cricket lovers who do not want to miss a single spot of 2019 World Cup Live match unknowingly go to various websites where they show more ads than live matches. There are also many cricket fans who would be busy at their workplaces and are unable to watch the world cup via sitting relaxed on their home’s couches. But, each of you fans would not miss any single update of ICC Cricket World Cup 2019 live Scores.

Thanks to technology, this has effectively made simpler for Sports lovers. Regardless of whether the client is a lifelong fan of soccer or extremist enthusiast of cricket, sports apps make users adjust as what is happening in the Game.

There are some ways in which you can enjoy the free 2019 World Cup Matches. “Cricbuzz” is on top of them.

Yes, Cricbuzz! “A Familiar Name among All Cricket Lovers”

CricBuzz was created by, Pankaj Chhaparwal and Pravin Hegde in the year 2004. By 2010, CricBuzz started developing a mobile app for live cricket news and scores.

In 2014, Cricbuzz an app acquired by Times of India Group’s Digital arm Times Internet is now in the top sports apps globally.

In 2015 World Cup, Cricbuzz saw 76 million visits or 36% of all visits in the Cricket category, ahead of ESPNCricinfo at 29% and StarSports at 20%.

Users spent 560 million minutes on Cricbuzz, 41% of all time spent on Cricket websites

348 million page views were recorded on Cricbuzz, compared to 236 million on ESPNCricinfo and 158 million on StarSports.

Cricbuzz sports app was the top sports apps in 2018 by worldwide downloads along with close to 29 million installs.

First-time installs of the Cricbuzz app grew by 17% year-over-year and out of which 63% were from India.

According to the latest report, Cricbuzz has again secured the first position with over 10 million installs. 93% of those installs were from India

Cricbuzz, in April 2019 was ranked 259 globally by Alexa Internet and ranked 16 in India and Bangladesh.

Must be amazed by the growing stats of Cricbuzz, whether it is about App Downloads, App Reach, Average usage time, Revenue, Popularity or Huge User-base. This is the App, which could give huge business to any business holder, and app development like Cricbuzz could be a source of huge revenue for any business holder.

For developing an App like Cricbuzz, there are some must-have features that should be included in the app by mobile app developers i.e.

Must-Have Features for developing A Sports App Like Cricbuzz.

Your sports app user goes to your app since they need to know the latest scores, stats, and news. What’s more, they need to be updated about the principal features in a hurry. Thus, this is one of the core features, which make your sports apps like Cricbuzz With this feature, you can give convenience to your users and help sports fans to become familiar with another game without lifting a finger and solace of their time. For Sports app development like Cricbuzz, this is one of the fundamental features for your viewers or app users.

The feature “Push Notification” is one of the center features for the up and coming occasions identified with sports matches for the up and coming occasions of matches. The key point is to comprehend the intensity of push notifications. However, you don’t have to battle for the consideration of your app users. Because of the way, this is one of the connecting with features from which you can achieve your users by giving helpful services in a hurry. Being a sports tech startup, in the event that you are searching for a technology accomplice, which can assist you with providing solutions where sports aficionados or fans can appreciate the game and keep updated themselves, you can hire a full stack app developer from driving best mobile app development company.

So, as to expand your user’s engagement, it is imperative to offers on-demand sports video in the demand of your users or viewers. However, it is essential to give the quality of broadcast and each time your user watch. Moreover, it is additionally imperative to furnish solutions alongside those features to your users, which give content faster and simpler at broadcast quality. 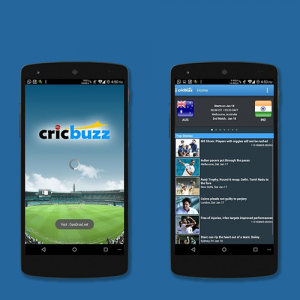 Amid Sports app development, all you simply need to give solutions as far as features, which give them simple access to various games. Regardless of whether it is tied in with giving live streaming or a couple of significant features of matches, it is imperative to think about this primary element to check the games to any device and whenever or anyplace.

Discussing other significant features to integrate to develop best sports apps like Cricbuzz, OneFootball & ESPN at that point you can give an assortment of solutions from which they can make most out of sports update apps like ESPN, FIFA or One football. Your app users can without much of stretch book tickets for games legitimately from the application. Additionally, they can check the seat accessibility directly from the sports app. Besides, the user can check the availability of seats for up and coming matches inside the game app. Furthermore, user can likewise effectively share what they feel like to share in various social media platform with their friends.

Today, sports apps have made a big pace in the sports industry. So, if you are having a sports app idea, which is worth sharing, then you can cross-verify it with us. We’re having a team of sports app developers, which can help you to make the right decision.

In case, if you still have any query or confusion regarding how much does it cost to create sports apps like cricbuzz, how long does it take to create an app like Cricbuzz, mobile app development estimate or sports app developers cost, sports score apps timeline, then you can get in touch with us through our contact us at [email protected]