If you visit Google Trends, iOS app development query has been at peak popularity since the beginning of 2022. From developers to students & entrepreneurs, “what programming languages are best for iOS app development” is one of the most common queries.

The requirements of an app idea also affect the choice of programming language because every language has its own offerings. To know your requirements better, you must first evaluate your app idea and research the feasibility of the market. Then you must find out if you want to opt for native or cross-platform app development. The market share of the iOS industry is enough to speak about the legacy of Apple. And it is also a reason why entrepreneurs target a premium market share by building iOS apps. Let us dig out the most popular iOS development languages.

Here we will look at the most popular languages in the market. We will see its popularity, features, advantages, and when to use it as part of all the languages for your better understanding. The article has separated native and cross-platform languages so you can quickly grab the best iOS development language according to your requirements.

When we say Native, we refer to a dedicated app development process. When you build a native app for iOS, your app will only work in the iOS operating system. You cannot run it on Android.

Native apps provide a higher engagement with the operating system where the app can deliberately use hardware like the camera and other sensors effectively. Here are the best iOS programming languages for native apps.

Since its release in 2014, Swift has been a go-to choice for iOS app developers. Apply released Swift as a direct competition to Objective C. iOS app developers have built robust iOS apps with Swift since it integrates very well with the Apple ecosystem. Swift 5.7 is the latest release announcement from Apple in WWDC 2022 (Source) Advantages of Swift as a iOS Programming Language

Swift is owned by Apple, which can be an ample reason for the developers to use this language. Further, if you want a faster development, security, and better garbage collection process, you can opt for Swift.

Objective-C was built in 1984, and it because famous for building iOS applications before Swift arrived. It is derived from the C programming language with added object-oriented and dynamic run-time features. 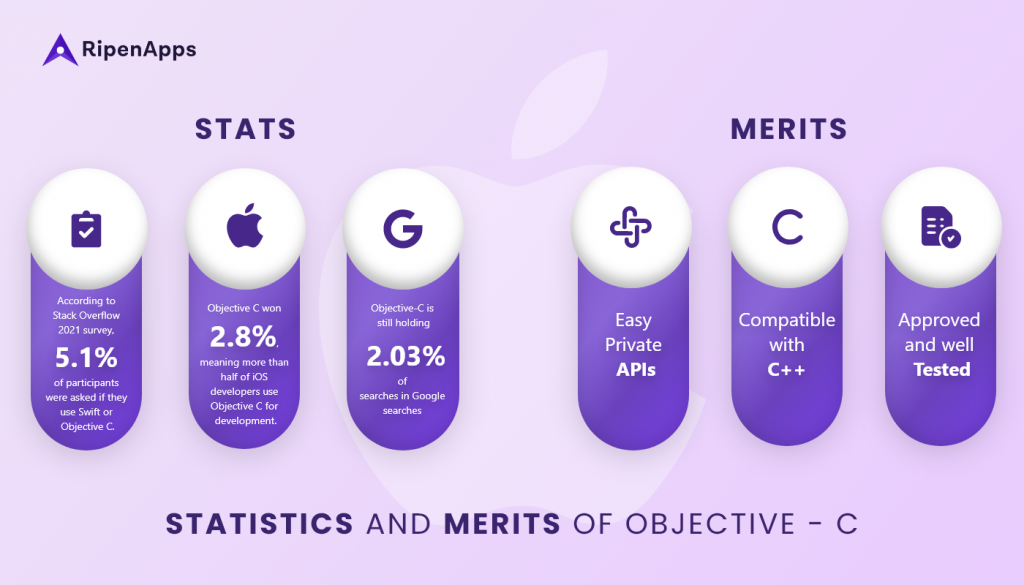 When you have to use C or C++ third-party frameworks extensively, Objective C is a better choice of development for iOS. You should not use any other language if the previous code is written on Objective C.

Cross-Platform apps are built to work on multiple operating systems and devices. as the term suggests. An app built with a cross-platform approach on Android has the potential to work on iOS with the same code. Here are a few of the cross-platform iOS app development languages.

ReactNative is owned by Meta Platforms (earlier Facebook). Being built by one of the top giants in the tech world, ReactNative is highly used to deploy cross-platform apps on iOS and Android. If you prefer massive community support and want to work with a language with a brand image, then you should go with Meta Owned ReactNative.

Flutter- Build apps for any screen

Google owns Flutter, and the main focus of the technology was to build, test and deploy appealing apps with a single codebase. The company has been continuously updating Flutter since its release in May 2017. Google has announced the latest release in May 2022 with Flutter 3. If your app focuses on appealing UI and effortless multi-screen support, then you can go with Flutter as your iOS programming language.

Wrapping up Which is the Best iOS App Development Programming Language?

All the mentioned languages have their advantages and use cases. Yet, if you are searching for the best iOS app development language, then Swift is your go-to option. Apple owns Swift, and the company integrates the best of the possibilities into its ecosystem. However, the requirements of your app idea affect the final decisions. For example, if you want to build a cross-platform app, Flutter and ReactNative are your options. Hence, we will leave the final take on your side.

Feel free to consult RipenApps if you are looking for a Mobile app development company or have a query about the above content.

Which programming language to use for developing native iOS apps?

There can be multiple programming languages for building native iOS apps. Yet, if you ask specifically, Swift and Objective C are highly used by top-notch iOS app development companies.

Which language is the most popular language for writing apple OSx applications?

Apple integrates the best of the functionalities into its own systems. And Swift is the programming language built by apple. It is also the most popular language for writing apple OSx applications because of its powerful native development advantages.

Which programming language to use for developing cross-platform iOS apps?

In 2023, there will be numerous cross-platform development programming languages for iOS. However, ReactNative and Flutter win the race because of their simple coding style, faster performance, and appealing UI delivery.