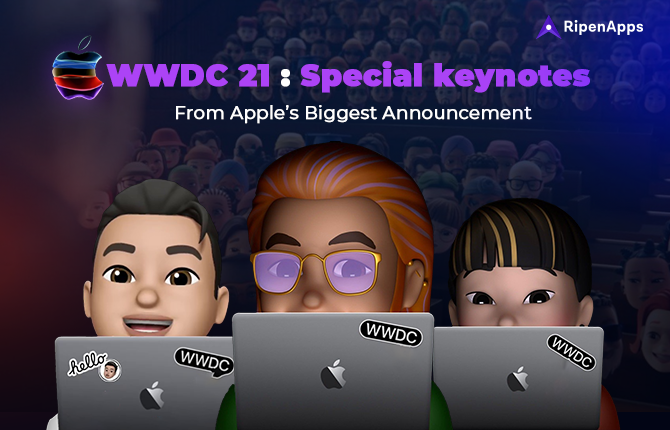 Like every year, this year has also experienced exciting reveals, inspiration, and opportunities from Apple’s corner in terms of the new iOS 15 release, watchOS, new macOS in its WWDC 21. This worldwide developers conference has a plethora of new treats for the iOS app developers community.

This time WWDC 21 took place virtually of course, from Apple Park.
As WWDC has always been an opportunity for iOS app developers to learn about new technologies, tools & frameworks that rely on to develop innovative applications and games, this year Apple also announced a special treat- ‘Swift Student Challenge’ for young app developers to demonstrate their coding skills.

Let’s take a look at a round-up of everything that Apple announced in WWDC 21.

The very first keynote was about its iOS. Apple has released its updated iOS 15 where it has made big changes to its iOS with new features for FaceTime, Messages, content sharing capabilities, and much more. There are also new updates for Maps and improvements to Notifications

In its latest conference, Apple also revealed iPadOS 15 which consists of changes to Widgets where users can place them anywhere on the home screen. There are big improvements that are going to happen to its Notes app and the Translation app from iPhone is also arriving on iOS.
The all-new iPad OS experience offers an adjusted UI and UX with widget and page rearrangement for neater displays and new feature Multitasking.

Apple has launched watchOS8, which is carrying new exciting updates for Health along with a new Breathe app, a feature to track sleep, and much more. The support for Portrait mode, the picture on Watch Screen, Digital crown to adjust the depth, and new workouts are also there.
Those who like to text using their Watch can use GIFs in iMessage too.

It’s very new release consists of macOS Monterey software which is a fantastic Universal Control feature that lets the users control multiple iOS devices at the same time with one mouse and keyboard.

Apple made some tweaks to its Health app that consists of measurements for things like walking steadiness, a new Trend feature, and also health sharing between loved ones.
Users can soon share data with their doctors, too, in a secure manner.

Apple announced the new App Privacy Report that is responsible to sees Apple’s native Mail and launched the feature named Digital Legacy which will let others of deceased family members recover data.

In this big announcement, Apple confirmed it is bringing Siri to third-party accessories, with other HomeKit upgrades as well.

There is also a release to magnify the music as Apple confirmed that its Spatial Audio feature is arriving on Apple Music.

It is indeed a big announcement hence Apple is offering many more APIs for app developers. One such new feature is Object Capture, a new 3D API for faster animation render, letting developers create ways for users to easily scan and capture objects in their apps just as Wayfair does with furniture.

Developers can now build and test apps in the cloud

New launch for developers. Now iOS app developers can build, test, and deliver apps in the cloud. However, it only stores the ‘products’ of the build and makes it easy to distribute apps across all iOS users. Also, Testflight makes its way to the Mac.

We at RipenApps- the leading iPhone app development company keep eyes on every update to make sure that our developed apps can be businesses’ torchbearers for their users and provide them ease to operate their desired services.